Director of Music and Liturgy
Email: Click Here to Email

Mark Ignatovich began his work in music ministry in 1971 as an organist at the Church of Saint Margaret Mary in Falls under the pastorate of Father John E. Bell and later, Father Edward M. Masakowski who encouraged him to study classical music with MaryAnne Wozniak. He has since then served as an organist at Saint Mary of the Lake in Lake Winola under the pastorate of Father John W. Casey and Father Anthony M. Urban, Saint Mary of Mount Carmel in Dunmore from 1980 to 1983 under the pastorate of Monsignor Charles W. Heid, where he worked with choir director Mary Perry. During his years of graduate study in Washington D.C. he served as organist/choir director for the Church of Saint Stephen the Martyr in Washington D.C. and as organist at Cottage City Presbyterian Church in Cottage City, Maryland. Upon returning to Pennsylvania he began his thirty-two year service as Music Minister at Saint Mary’s Church of the Immaculate Conception in Wilkes-Barre under the pastorate of Monsignor Thomas V. Banick and then J. Duane Gavitt. In 2018 Mark joined the staff at Saint Rose of Lima and Our Lady of Mount Carmel in Carbondale.

Mark holds a Bachelor of Music degree in Education from Marywood University, Scranton and a Master of Arts degree in Musicology, majoring in music theory with minors in music history and composition, from The Catholic University of America, Washington, DC with further post graduate studies also completed at CUA (Ph.D. all but dissertation). His organ instructors have included Sr. Jeremy Hornung, IHM, and Robert Rosenkrans at Marywood and Wojciech Wojtasiewicz at CUA.

During his tenure in Wilkes-Barre, Pennsylvania, Mark served as Director of Music Ministry for St. Mary's Church of the Immaculate Conception, and its mission church, St. Joseph's (until its closure). Mark oversaw the entire music program for the parish, including Adult Choir, Handbell Choir, Children’s Choir, Family Choir, cantor program, contemporary music ensemble and additional instrumentalists. He served as organist/accompanist for all weekend liturgies plus all additional Holy Day, sacramental and other special liturgies and services. He was responsible for planning and preparation of all liturgical services and served as chair of the parish Worship Commission and was a member of the parish Pastoral Council. In addition he produced three sacred musical productions which had been presented a number of times during his tenure and oversaw sacred concerts performed in the church, including parish music ministry concerts.

From 1992 to 2007 Mark served as the Chapter Director for the Scranton Diocesan National Association of Pastoral Musicians Chapter. During that time, he also served various leadership roles for the Pennsylvania Northeast Chapter of the American Guild of Organists, including secretary, sub-dean and dean. He also completed an eight year term in 2007 as a member of the National Council of Chapters for NPM. From 1989 to 1998, Mark was a member of the Liturgical Commission for the Diocese of Scranton and served as chair of the music sub-committee. Over the years Mark has been a presenter of a number of workshops for NPM at the local, regional and national level as well as workshops for the local AGO chapter. These have included topics such as parish repertoire for Holy Week and Funerals; evaluations of new musical settings of the Eucharistic acclamations; a comparative study of permanent worship aids; workshops on basic and advanced hymn accompaniment techniques; demonstration of requirements for the joint AGO/NPM Service Playing Certificate. Nationally, Mark has presented workshops on how a diocesan worship office relates to an NPM chapter and two of the Standards in Repertoire projects developed by NPM which include Funerals and the Communion Rite. Mark also was one of the first eleven candidates to successfully pass the joint service playing test sponsored by NPM and the AGO. In addition to his parish duties Mark also has performed organ recitals locally, served as organist for several choir festivals and served as organist at a number of diocesan events. He also offers private organ and piano instruction. Mark had been part of the faculty of Marywood University as a part-time lecturer in Music History and World Music from 2004 to 2007 teaching both undergraduate and graduate students. Mark and his wife Doreen, have four children. 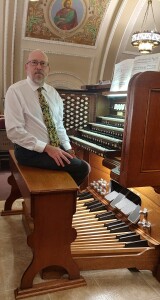